Meetings. They creep into our daily working lives and settle in. They settle in well. Meetings have become so routine, we seldom think much about them. Today, we would like to share some ugly truths about the meetings with numbers:

1. We spend more time at the meetings than ever

With technology advancement, most of our daily conversation happens online. It seemed only logical that more communication will happen virtually and there will be a smaller number of ‘meetings.’  However, the numbers show quite the opposite trend.

Average employee attends 62 meetings per month, which is about 15 meetings per week. If you’re a senior level manager or executive of a company, the situation is more severe. On average, you spend about 60% of the time in meetings, which means 23 hours per week. Every day will be hurrying from one room to another. It is not necessarily great news as many studies suggest that the more meetings employees attended, the more exhausted they’d feel and the higher they perceived their workload to be.

2. Are your meetings effective? 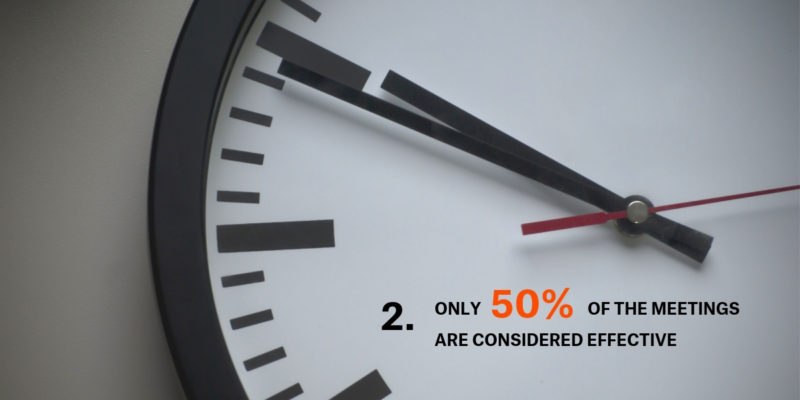 This means 50% per cent of the time, it’s considered a waste of time, more importantly, waste of money. David Gradly suggests ‘We have a global problem with meetings’ during the TED talk. He refers to this as MAS: Mindless Accept Syndrome. It’s when you confirm your attendance to a meeting you are invited to without much thought, as soon as you get an invitation in your email.

It is not uncommon to see your colleagues walk into a meeting room, and continue replying to the ‘urgent’ emails. This ‘multi-tasking’ happens all the time. And your mind starts to wonder as only two people out of ten in the room continue talking to each other dominating the meeting. Often, there are too many people invited, instead of just the ones who are actually relevant to the goal of the day. Some just find the meetings as ‘distractions’ from the task at hand.

4. 25 % of the time, irrelevant issues are discussed

Mere discussion without a shared purpose is the same as direction-less chatter. Especially when the reason for getting together was not shared or stated clearly in advance, people often get lost where to refocus. When an internationally recognized technology company surveyed its 30,000 employees, they found that only 54% of the time spent in meetings was beneficial.

Michael Mankins, gathered data on how much time is consumed annually in a large organisation to support a weekly executive committee meeting. The result was shocking as it showed up to 300,000 hours a year. It is called, the ‘Ripple effects’ How does it happen? Well.. the executive meeting itself for all the senior staff accounts to 70000 hours a year, but before each meeting, 11 unit heads meet, then for this meeting there are meetings in each of 21 teams, then for this team meeting there are prep meetings, and it goes on. If the time is the most valuable investment of someone, then perhaps it is worth trying to really understand how much value in return everybody receives?

Can everybody answer the question ‘Why are we here today?’

Meetings are a crucial part of any business operations to create and share new ideas, to come up with solutions for challenges and discuss important matters. However, they may not be always necessary. Before shooting out meeting invitation emails to people, take a moment and think about what is it that you would like to achieve– what is the goal of the day? Make sure you have thought about the situation or a topic and think about how you could make the meeting as efficient as possible to benefit everyone. Then you can ensure that you invite only people who are actually relevant to the goal.

When you have gathered the right people in the meeting with the carefully planned agenda, then it’s time to get the participants engaged. How can you ensure that you have active dialogues instead of having a monologue? Get ideas about how to get people fired up in a meeting.

Let’s end on a positive note.

Good News? 92% of meeting attendees still value meetings as an opportunity to collaborate, discuss, and contribute to the organization. The meetings just need to be smart ones. So let’s change boring to creative, from wasteful to productive! It’s about time we become more thoughtful about how we spend time in every meeting and utilise them to the fullest!

What is the best time for a meeting?

From Singapore to Copenhagen

What did HUONE do for its global strategy day?(Example Agenda)

5 Tips for a Successful Hybrid Event