Are you going to too many meetings? Do you sometimes think that people talk too much? And did you know that constant talking in meetings leads to mental multitasking? HUONE had the pleasure to interview Bastian Overgaard about the common challenge many of us face: ‘ineffective and noisy’ meetings. And how you can solve this by utilising silence?

Bastian Overgaard is a highly sought-after keynote speaker, an author, and a pioneer in the silent co-creation concept. After years of research, he has developed the Silent co-creation methodology to help leaders facilitate dynamic high-performance meetings. He shares the background of the concept and methodology, Silent Co-creation, which has helped many global companies over the past 10 years. Also, find out how one can utilise ‘silence’ in your daily work to create more value.

In this interview, you will learn

I used to be a TV producer, and I was doing a series called ‘Club 180’ on Danish National Television. Club 180 was about challenging our habits by deliberately doing the opposite of what we would normally do in everyday situations. In a way, it was an attempt to wake people up from living on autopilot and help them think more creatively in their life.

While researching TV programs, I realised that one of the habits we take for granted is that when we meet other people, we instantly start speaking. This is a norm, just as we don’t break the stream of words while interacting. If we don’t talk, it is awkward, or weird; And this is exactly what wakes us up from autopilot mode. So, this is where the idea of using silence to break the norm came to me, and after some initial experiments, I had my ‘eureka’ moment; Many people shared – after being silent together –  ‘I feel like I know you better,’  or ‘I feel more calm and relaxed.’

“Words are supposed to bring us closer together, but often they create a wall between us. Sometimes we can’t hear each other for all the words. When we co-create silence in our meetings, we go beyond the wall and connect on a deeper level.” 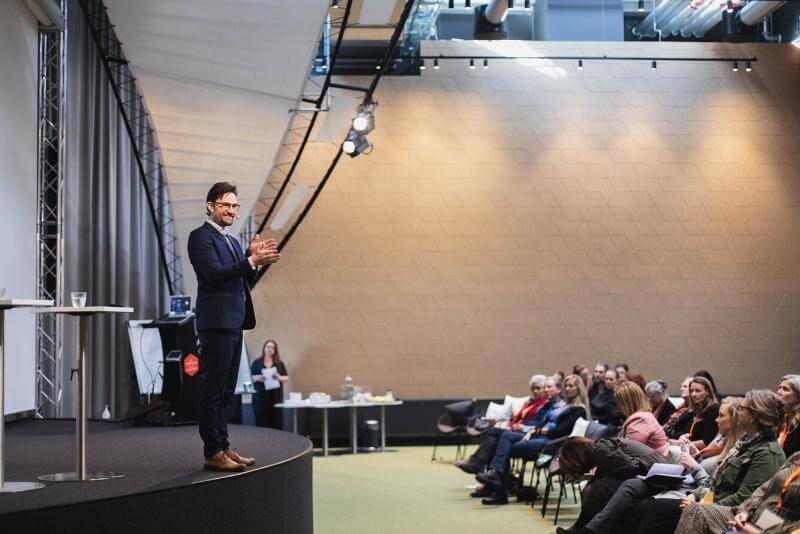 (Bastian Overgaard speaking at an event at HUONE Copenhagen)

So what is ‘silent co-creation?

First of all, It is not about individual meditation. Secondly, it is not about using silence as a communication tool in a way that speakers and actors do, such as ‘the dramatic pause’.  Silent Co-creation is a methodology that is used systematically and strategically to ensure optimal mental performance and communication in teams and organisations.

Silent Co-creation is especially powerful if you want to create a healthy high-performance culture with many meetings. It can be implemented, for example over a 12-week period where employees are introduced to the principles and managers are trained to facilitate the co-silence practically in their meetings.

The principles for silent co-creation are:

1- Silence is always facilitated and agreed upon

There must be someone in charge, a facilitator, who is facilitating the silence, and communicating with everyone that we are going to be silent together. The use of silence can trigger a lot of resistance and insecurity because there is a loss of control in the space between the words. This is why managers must stand strong and create psychological safety in silence. This takes training in body language, empathy, and the basic rules of Silent Co-creation.

2- The group must have knowledge about the silence

All participants must understand why and what they are using it for. It is important for the facilitator or manager to ‘pre-frame’ the silence in a way so silence makes sense for everyone, and feels safe. Because the silence can feel uncomfortable, and unsafe if you don’t have the right frame for it.

Imagine a scenario where you’ve never heard about ‘silence’ and walked into a room and somebody says ‘let’s be silent for a minute before our meeting’ you could think ‘did someone die or something?’ It is strange.

This one sounds obvious, but in reality, it can be challenging. Silence is a powerful tool to achieve great things but at the same time, it is fragile like a soap bubble. Thus, it is important that the facilitator has a  ‘strong authority to make sure the co-silence is respected. Just one person breaking the silence or not respecting the silence, can easily destroy the whole moment. And gaining that ‘authority’ takes practice.

4- Silence must have a specific timeframe

Imagine that a leader starts a meeting by saying ‘let’s be silent together for a while before we start”. And then everyone just sits there waiting for the silence to end. Most people would feel awkward and anxious, and start thinking something like  “well, who should start talking first?” This creates a feeling of uncertainty that doesn’t support the psychological safety in the group. Therefore it’s important to have a very clear time frame. There is no clear rule for how long the silence should be. It depends on the personality type, the timing, and the place of silence. It takes practice for the facilitator to be able to choose the right timing. But between 30 seconds to 2 minutes is a time frame I often work with.

“ Going away from our ‘words,’ and being in silence, is a loss of control for many. However, that loss of control is where we find the best, most innovative ideas, and connect with one another on a deeper level. So, in a way it’s a ‘controlled loss of control’– Bastian Overgaard

The success of Silent Co-creation lies in the details. An unclear pre-framing, wrong body language, or misjudgment of the situation by the facilitator, can make the silence feel excruciating for everyone in the room. That is why it is a good idea to have some training and practice before introducing silence in your meetings. Furthermore, there needs to be a commitment from the management for using silence and a plan for how to introduce it in an organization.

Who is the audience? Who will benefit from it?

First of all, the target group of The Silent Co-creation methodology is managers and employees who want the highest collective intelligence in their team. Silence is therefore used by humble managers with a high degree of self-awareness and emotional intelligence. It is NOT for the leader who wants power by manipulating others or the employee who wants to dominate every meeting in order to climb the corporate ladder. 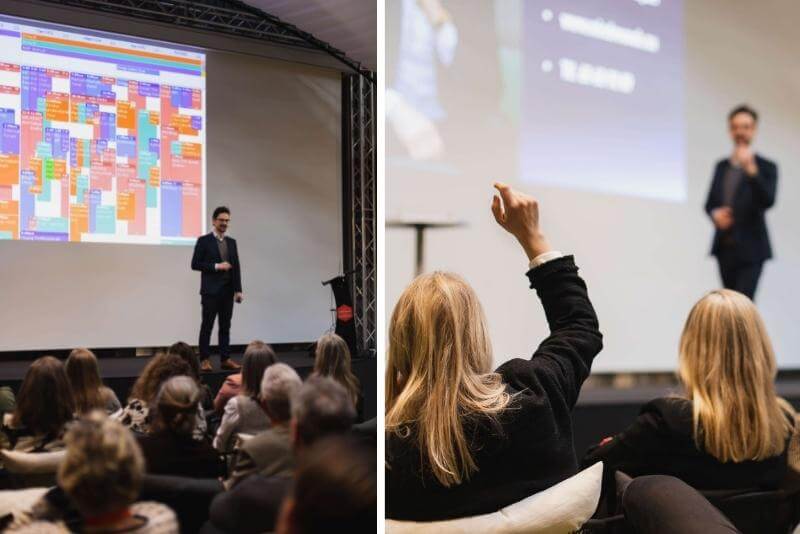 The problem for many leaders is that their days are usually packed with back-to-back meetings. They are always in ‘ON’ mode, always communicating with someone about something. If they haven’t evolved from traditional standard meetings, they will be exposed to constant talking from the start to the end before moving on to the next meeting. They gather so much information that their brain has to process, and even though they seem to cope, neuroscience shows us that this does not work in the long run. Information overload leads to bad decisions, misunderstandings, and a lack of attention to what is most important.

Ok, I fit in the audience. Where can I start with silent co-creation?

I’m tempted to say that you should seek professional help. Even though Silent Co-creation sounds simple and easy, it is a professional tool that takes a deeper understanding and practice. However, if you were to try it yourself, the most important step is to learn about it first. You should start gathering information and gain an understanding of why silence is important, so you can motivate your colleagues to support Silent Co-creation.

Then you should practice. Start by experimenting in a small group with a high degree of psychological safety. You can even do this One2one with a colleague you trust. How does it feel to introduce Silent Co-creation and the reason for using it? What is the difference between asking for 30 seconds or 40 seconds of silence? Do you observe the shift in energy, body language, and communication while being silent together? By trying it out in a safe space, you can gain some of the insights that are important if you want to be a skilled silent facilitator. This also involves asking for frequent feedback – especially in the beginning. This will raise your awareness of how different silence can be perceived depending on small adjustments such as duration of silence, pre-framing, group size, and timing.

What’s your opinion on the Future of Work?

A question I often get is: Can Silent Co-creation also be used in online and hybrid meetings? And my answer is that it’s even more relevant to use silence when we meet each other behind a computer screen.

You’ve probably observed how you can feel even more drained of energy after an online meeting, right? When we communicate through a webcam, our brain is working overtime compared to physical meetings. In an online meeting, we don’t get the full picture of each other. It’s difficult for our brain to read the body language, facial expressions, and tone of voice of the other participants in the meeting. Therefore our brain is constantly compensating for the limited communication and this takes cognitive energy which again reduces our decision-making skills, our memory, and our ability to navigate socially.

In a future where many teams have to meet and work together online, this has many potential consequences. For the individual person, it can lead to stress, decision fatigue, and impaired creative skills. For the group, it can reduce the quality of communication, listening, and collaboration. One of the most important elements of high-performance teams is trust and psychological safety. And to gain this, you need to be present with each other. Showing a lack of interest and attention to your colleagues can be detrimental to productive teamwork, and you can ask yourself: “How many times have I lost attention to what is being said in an online meeting?”

Making Silent Co-creation an integrated part of our online meetings helps us become more aware and respectful towards each other. In the silent moments between all the talking, we feel closer together. The companies and organizations I have worked with even report a higher degree of curiosity to other colleagues. And one could say that curiosity is one of the fundamental elements of a good meeting. 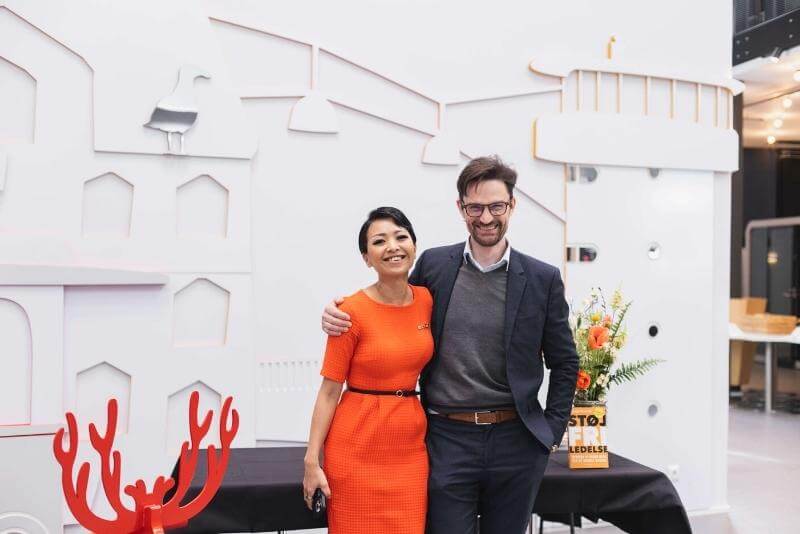 (Bastian Overgaard has been a great ambassador of HUONE, after attending & speaking at the venue many times.
Image: Evon Blomstedt, the founder of HUONE, and Bastian at HUONE & friends event)

Connect with Bastian, and learn more about his work here.

From Singapore to Copenhagen

5 Tips for a Successful Hybrid Event

Tips for organizing meetings, news and invitations for events.