Here is a joke to introduce you to different personality types. ‘A man was out driving on the motorway when a voice came over the radio saying ‘Warning: a car has driven over to the wrong side of the motorway.’ The man turned to his wife and said: ‘One? There are several hundred!’ Not many people realise that ‘I’ is the problem. They’d rather think that all the others are idiots.’ This old Norwegian joke is often told by Thomas Erikson, a behavioural scientist and leadership coach as well as the author of ‘Surrounded by Idiots’.

DISC. If you are working in the corporate world, you most certainly have encountered these four letters, be it as part of the recruitment process, or during training later on in your career, standing for Dominance, Influence, Steadiness and Consciousness. 4 personality types defined by 4 different colours: red, yellow, green and blue, according to psychologist W.M. Marston.

Swedish author and leadership coach Thomas Erikson states in his book ‘Surrounded by Idiots’ that only 5% of the global population is purely monocoloured, most of us being a mix of two, three or even all four colours. However, some characteristics prevail, and that explains why we don’t always get along and tend to consider ‘the others’ idiots. Our dominant colour influences the way we approach life and the way others perceive us.

When we walk into a meeting room, our personalities walk in with us, hard to leave them outside. It is fascinating, as described in the book, to see how people behave in meetings depending on their personality.

1. The Reds want to get things done

Instead of waiting for consensus, the reds want immediate results, as they are solution-oriented and having a ‘time is money’ attitude. They get frustrated when someone else is wasting their time with too much talking or too much looking into details. They are impatient and appear insensitive, as ‘politically correct’ is a term that they don’t believe in.

If there is nothing to gain from the meeting, a red person diverts his attention elsewhere, be it fiddling with their phones and laptops, or they leave the room to answer to ‘that so much more important phone call’. It is the red colleagues who tend to vanish before the meeting is officially closed.

The Greens are great listeners, laid back and supportive. They are just great to have in meetings because of their usually cheerful attitude. Unfortunately, they lack initiative and do not intervene if not asked. A dominantly green person dreads conflict. Being appreciated is very important for them: they want to be everyone’s friend.

You will notice this if the topic of the meeting is about change: the Greens almost become invisible, hoping that it will all go away.  Greens would rather linger in the status quo, their way of thinking is ‘why changing if it still works fine?’

3. The Yellow – the one talking too much

In some meetings, they take over 50% of the time with their interruptions and comments. They are very articulate, enthusiastic and have great ideas. The downside is, they find it hard to follow through with what they promised, they jump to conclusions and bring a bit too much of their bubbly personality into the room.

Finally, the Blues: the orderly and disciplined Blues have THE eye for detail. Extremely analytical, they seem to lack the capacity of seeing the ‘big picture,’ focused as they are in not forgetting anything. The Blue personality type needs time to process information, to compartmentalise it somewhere.

Generally, a Blue person is quite pessimistic as well. Listening to them can be extenuating for a yellow or a red personality, who start asking themselves, ‘what’s the point?’ Frustration mounts and in the end, the poor blue is silenced back to the corner, with, most probably, the yellow saying something like ‘Where was I?’.

How does understanding personality types help me?

So ok, now, what to do with this information? How to help ourselves? First, we need to find out what personality we are. Only this way, we know what our strengths and weaknesses are and finally understand why ‘some others’ are idiots in our eyes.

Second, try to accommodate the different personality types. In the book, Mr Erikson says he gets plenty of criticism from people who say they would not be true to themselves if they modify their behaviour, and yet the truth is, he says, we’re doing it already, all the time. We talk differently to different people, and we adjust our style and language with friends, bosses, and colleagues.

Third, remember that different personality types make this world an inspiring place to live. A colourful world. Imagine if the world would be only blue? Or yellow? 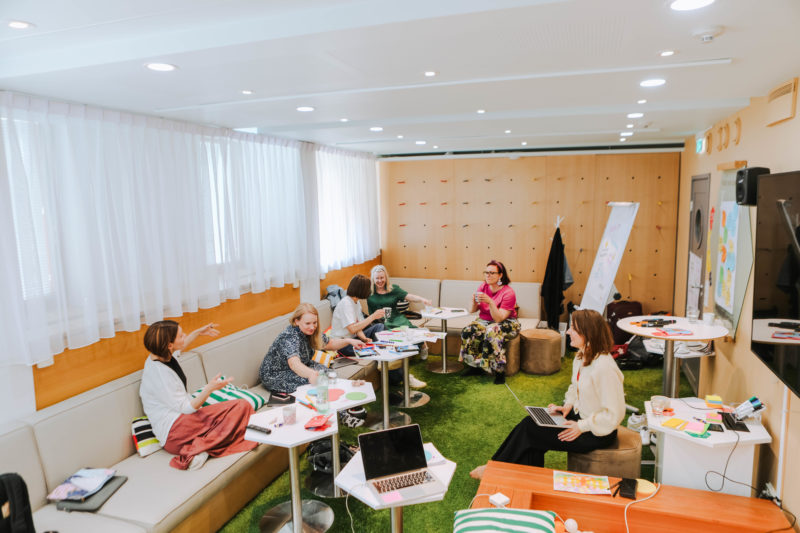 What can I do with my color, and with other personality types?

Instead of focusing on how annoying it is to have to deal with the details rolled out by your Blue colleague, take a breath, walk out for a minute if you need to, and acknowledge that, if he or she would not have been in the room, some crucial elements for the outcome of the meeting, would not even have been noticed. Precision may not be your forte, but he or she has it, so use it, take advantage of the fact you work in a team.

Help the Yellow colleague to focus on his or her tasks and learn to be as daring and enthusiastic as they are. If they can talk, why can’t you? Try!

Admire the strength and charisma of the Reds: they are verbally articulate, direct, and they want to bring things forward. Don’t get offended by their rude manners, work with them, try to adapt the speed of your work to theirs, they may not think it’s enough, but they will appreciate the effort.

As for the Greens in the room, try to find out what they think, encourage them to honestly express their opinion, without fear, push them to challenge themselves. In return, from the Greens, you can learn to relax, to show more empathy, and hence to develop better relationships at work.

Conclusion: the next time around, let’s welcome our differences, observe and learn from each other rather than getting frustrated and irritated. We are all a lovely, nuanced mix of many colours, all to be discovered. Besides, remember that if everyone agrees, development is impossible. As Mr Erikson puts it: the Yellows come up with the ideas, the Reds say ‘great, let’s do it,’ the Greens carry it out, and the Blues evaluate it.

And voilà! The perfect group dynamic!

Read More on How to Embrace Different Opinions in Meetings

HUONE announces its new Board of Directors

We are going back to the growth story

Category: Behind the Scenes, Entrepreneurship, Our story
December 7, 2022